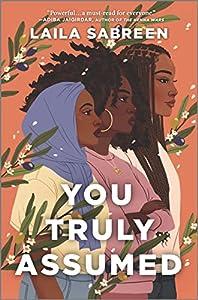 Product Description
In this compelling and thought-provoking debut novel, after a terrorist attack rocks the country and anti-Islamic sentiment stirs, three Black Muslim girls create a space where they can shatter assumptions and share truths.\nSabriya has her whole summer planned out in color-coded glory, but those plans go out the window after a terrorist attack near her home. When the terrorist is assumed to be Muslim and Islamophobia grows, Sabriya turns to her online journal for comfort.
You Truly Assumed was never meant to be anything more than an outlet, but the blog goes viral as fellow Muslim teens around the country flock to it and find solace and a sense of community.\nSoon two more teens, Zakat and Farah, join Bri to run
You Truly Assumed and the three quickly form a strong friendship. But as the blog’s popularity grows, so do the pushback and hateful comments. When one of them is threatened, the search to find out who is behind it all begins, and their friendship is put to the test when all three must decide whether to shut down the blog and lose what they’ve worked for…or take a stand and risk everything to make their voices heard.
Review
"
You Truly Assumed is a beautiful portrayal of the multitude of ways to be Black and Muslim while navigating our contemporary world. It's a powerful story about faith and friendship that should be a must-read for everyone."—Adiba Jaigirdar, author of
The Henna Wars and
Hani and Ishu's Guide to Fake Dating\n“With three distinct voices, and flowing slice-of-life narration, You Truly Assumed captures the emotional range of three young Muslims as they grapple with a world quick to sum them up. I reached the ending with tears in my eyes—tears cued not by sadness, but hope and elation as Bri, Farah and Zakat lit their paths together. A heartfelt and affirming story featuring Muslim characters, the kind my heart needed when I was young.” —S. K. Ali,
New York Times bestselling and award-winning author of
The Proudest Blue,
Love from A to Z, and
Saints and Misfits\n“A powerful story about friendship and community, showcasing the Black Muslim representation I wish I had growing up.” —Faridah Àbíké-íyímídé,
New York Times bestselling author of
Ace of Spades\n“A book that can only be described as feeling like sitting in a sunbeam in a hushed place of worship: being lit from the inside out, being seen, being validated, on all levels but particularly cultural and communal. Laila Sabreen's voice is a voice that I know so many others besides me have been waiting for, and speaks not only the truths of her soul but the intense, true and beautiful story of the girls she knows share those truths—including me.”—Karuna Riazi, author of
The Gauntlet\n“Compelling storytelling that explores the challenges and rewards of being Black and Muslim is where this novel excels, and it will prompt readers to reflect on their own assumptions… An ambitious debut that will hopefully pave the way for more narratives centering Black Muslim experiences.”—
Kirkus Reviews\nAbout the Author
Laila Sabreen is a writer of young adult contemporary. Raised in the Washington, DC area, she currently attends Emory University and majors in English and Sociology. Her love of writing began as a love of reading when she fell in love with the Angelina Ballerina series. When she isn’t writing, she can be found working on essays, creating playlists that are way too long, and watching
This Is Us.

Set a price alert and get notified when the book starts selling at your price.

Want to Report a Pricing Issue?

Let us know about the pricing issue you've noticed so that we can fix it.