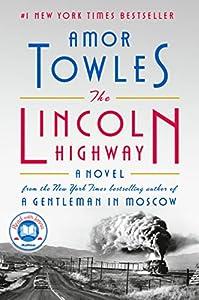 The Lincoln Highway: A Novel

Product Description
#1 NEW YORK TIMES BESTSELLERA TODAY Show Read with Jenna Book Club PickA New York Times Notable Book, and Chosen by Oprah Quarterly and The Washington Post as a Best Book of the Year“Wise and wildly entertaining . . . permeated with light, wit, youth.” —The New York Times Book Review “A classic that we will read for years to come.” —Jenna Bush Hager, Read with Jenna book club “A real joyride . . . elegantly constructed and compulsively readable.” – NPR The bestselling author of A Gentleman in Moscow and Rules of Civility and master of absorbing, sophisticated fiction returns with a stylish and propulsive novel set in 1950s America\nIn June, 1954, eighteen-year-old Emmett Watson is driven home to Nebraska by the warden of the juvenile work farm where he has just served fifteen months for involuntary manslaughter. His mother long gone, his father recently deceased, and the family farm foreclosed upon by the bank, Emmett's intention is to pick up his eight-year-old brother, Billy, and head to California where they can start their lives anew. But when the warden drives away, Emmett discovers that two friends from the work farm have hidden themselves in the trunk of the warden's car. Together, they have hatched an altogether different plan for Emmett's future, one that will take them all on a fateful journey in the opposite direction—to the City of New York.\nSpanning just ten days and told from multiple points of view, Towles's third novel will satisfy fans of his multi-layered literary styling while providing them an array of new and richly imagined settings, characters, and themes.
Amazon.com Review \nThe Lincoln Highway might just be one of the best novels of this decade, which is a feat considering
A Gentleman in Moscow, also holds that distinction (in this reviewer’s mind, anyway). Set in the 1950s,
The Lincoln Highway is filled with nostalgia as well as the gentle naïveté and hijinks of those who are young, optimistic, and on a mission. The story follows four boys who set out to travel the country in search of a fresh start: Emmett and Billy want to find their mother who left them when they were young, and Duchess and Woolly are on the hunt for a stashed wad of cash. Sometimes their dreams are aligned but often they are not. In other words, adventure ensues: There’s train hopping and car stealing, and with that comes the inevitability of trouble sparked from both good and bad intentions. Each of these young men is chasing his dreams, but their pasts—whether violent or sad—are never far behind. A remarkable work of storytelling that is a 2021 favorite.
—Al Woodworth, Amazon Editor
Review
Praise for The Lincoln Highway:\n“[A] mischievous, wise and wildly entertaining novel . . . Towles goes all in on the kind of episodic, exuberant narrative haywire found in myth or Homeric epic . . . Each [character], Towles implies, is the central protagonist of an ongoing adventure that is both unique and universal . . . remarkably buoyant . . . permeated with light, wit, youth . . . Towles has snipped off a minuscule strand of existence—10 wayward days—and when we look through his lens we see that this brief interstice teems with stories, grand as legends.”
—Chris Batcheldor, New York Times Book Review\n“Not only is it one of the most beautifully written books I have ever picked up, it’s a story about hope, friendship and companionship in a time when we need it so much . . . Towles brilliantly captures the inner reality of each [character] with profound and poetic prose. All eight of them are incredible forces in literature . . . Amor Towles is one of those authors that I think will become a Steinbeck of our generation and [...] I think
The Lincoln Highway will be a classic that we will read for years to come.”
—Jenna Bush Hager, Read With Jenna book club\n“[A] real joyride . . . hitch onto this delightful tour de force and you'll be pulled straight through to the end, helpless against